What to do about the affordability crisis? 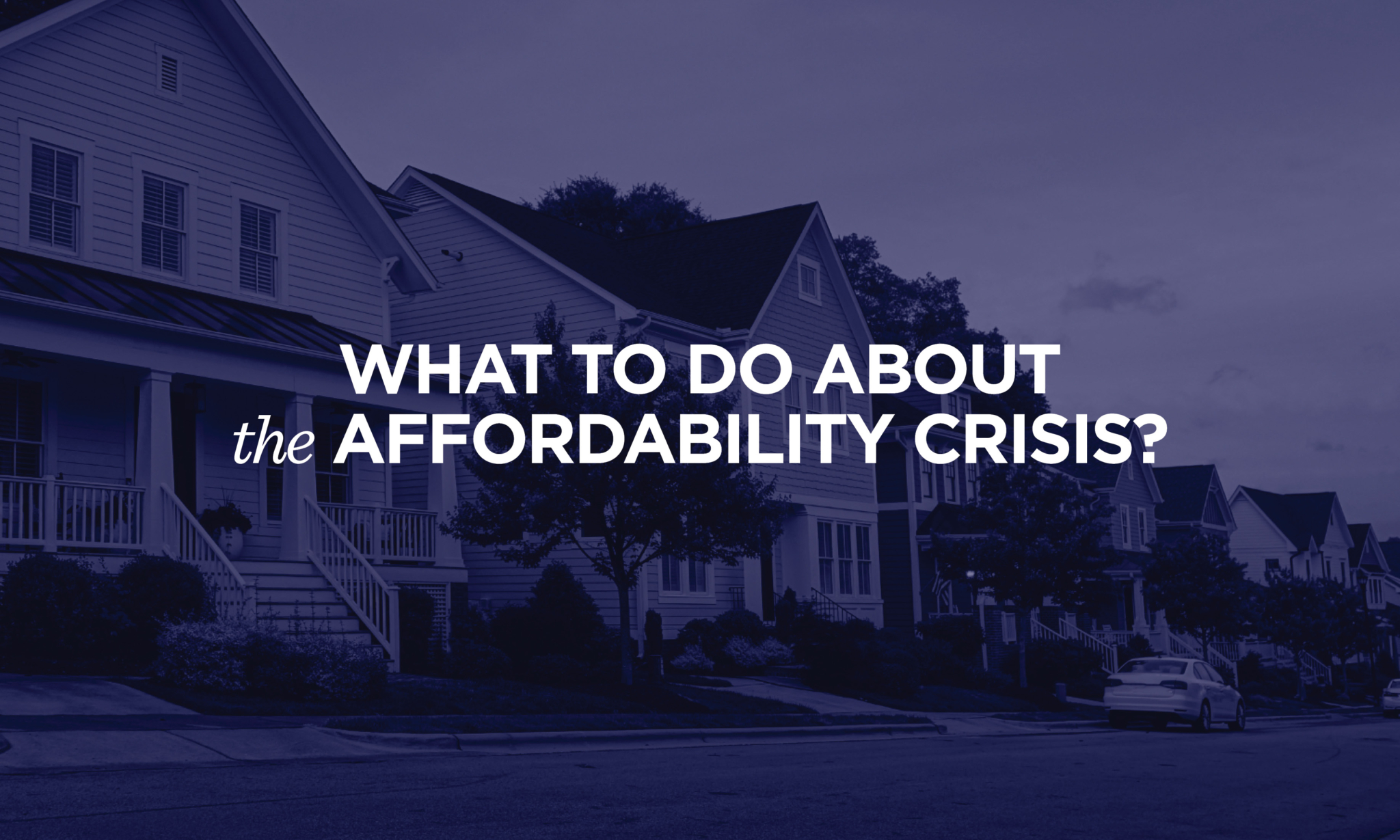 The affordability crisis is a big problem, causing brokers to manage their clients’ expectations.

Inventory shortages, supply chain disruptions and bidding wars that have pushed prices up to record levels are among the numerous factors that have exacerbated the affordable housing crisis that was already in full swing prior to the pandemic.

Now, real estate professionals and others connected to the industry are faced with the challenges of both guiding their clients through the journey of finding a home that meets their budget and adjusting public policy, such as reforming local zoning ordinances, with the goal of bringing more affordable units to market.

New buyers are outpacing the number of homes on the market in cities across the country, a reality that is ever-present and getting worse in Chicago, according to Tracey Royal, assistant vice president at Coldwell Banker Realty in Oak Park, Illinois, and president of the Illinois Women’s Council of REALTORS®.

“For people who’ve been thinking about it for a while but maybe didn’t have the courage or maybe the numbers didn’t look right, low interest rates have made homeownership really appealing,” Royal said. “But I think the increase in demand really stems from people seeing the value in a home. Many people are now able to work remotely, and that has enabled many to move to a desired location and obtain more space.”

The most straightforward look at the affordability crisis comes from reports like ATTOM Data Solutions’ Affordability Index. Based on factors such as average weekly wages and how much income a homebuyer needs to earn to meet expenses related to homeownership, the index reflects how mid-range home prices in a given county compare against historical prices. ATTOM assigns a number to each county based on those factors, with index numbers below 100 indicating homes are less affordable than the historical average.

ATTOM’s most recent report showed that median-priced single-family homes were less affordable year over year in more than three-quarters (77%) of the 575 counties studied. That’s compared to data from the fourth quarter of last year, when just 39% of counties were less affordable than the previous year. The average price of a home nationwide, according to ATTOM, reached $317,500 in the fourth quarter of 2021. Home prices were up at least 10% year over year in 368 of the counties analyzed.

Counties in the nation’s hottest markets tended to be less affordable. In the Boston area, for instance, Suffolk County had a median sales price of $665,000, and workers had an annualized average wage of $118,274 for an Affordability Index of 100. In the meantime, nearby counties such as Middlesex (95), Norfolk (94) and Plymouth (94) have all become less affordable for homebuyers.

Mary Gillach, principal of Gillach Group at William Raveis in Boston, says that there is almost nothing to work with that’s priced below the $1 million-to-$2 million range in that market. “You think of real estate being in five- to seven-year cycle — it goes up, it goes down,” Gillach said. “We are going on year 13 of being up. Last year was dramatic, and so has every year since COVID happened. Single-family homes anywhere have been crazy.”

Gillach’s team works in downtown Boston, as well as in Back Bay, Brookline, Newton, Needham, Wellesley and all the other western suburbs. She’s seeing inventory in those markets 10% to 15% lower than at this time last year, when it was already down. In some cases, towns are making adjustments in an effort to keep costs in check.

“Anything within 10 miles is built out,” Gillach said. “There just isn’t any land. Some of the towns are starting to change their zoning, which I find really interesting. Newton [about 10 miles west of Boston] is changing its zoning. In most of the town with a certain amount of land per house size, you can now add another structure and make it a multifamily home. And oh, people are up in arms. But there’s this housing shortage that we have, and you have to figure it out somehow. That was Newton’s solution, and we’ll see how far that goes.”

Seattle’s King County faces a similar demand for homes without the supply to match. ATTOM’s Affordability Index for the county was on the more affordable side, at 106 — due in large part to the area’s high average income of $111,423. Despite the relatively favorable affordability score, King County’s median sales price of $732,000 was substantially higher than that of its neighboring counties. Neighboring counties Snohomish and Pierce both had index scores of 77. Pierce County’s median sales price was $500,000, compared to an annual wage of $59,501, while Snohomish had a median sales price of $630,000 and an annual wage of $68,081.

Eddie Chang, senior global real estate advisor at Realogics Sotheby’s International Realty in Seattle, says Washington state ranks at the bottom for the number of units per household. Chang cited statistics from the State of Washington Office of Financial Management’s 2020 American Community Survey showing that in the last 10 years, King County has seen only 91 new units built for every 100 new households. Washington State as a whole ranks last in the nation for the number of units available per household, Chang said.

“Given the lack of housing available, as well as King County failing to build enough homes to keep up with population growth, this will continue to create more affordability issues in the market,” Chang said. “While the low interest rate will add a bit of extra pressure, the low supply is the main driving force affecting affordability in the current market.”

Mark Villano, branch manager at Veterans Lending Group, which works in the Seattle metro area, sees a lack of new construction as a major factor in the climb of housing costs. The rising cost of building materials and a backlog caused by the pandemic all play a role, he said.

“Ultimately, you know, the building community creates and supplies that inventory for buyers,” Villano explained. “If they can’t create new inventory, and sellers maybe don’t want to sell because it’s so expensive for them to go buy the next place, they may just stay in their home and renovate. It is pandemic-related in that regard.”

The Fed’s recent mortgage rate increase also plays a factor in rising demand and higher prices for homes. Villano said people became accustomed to rates below 3% over the last couple of years and are eager to buy before they go higher.

“They’re saying, ‘We’re not ready for this. We’re prepared for COVID rates, but now the mortgage costs an extra 300 to 400 bucks,’” Villano said. “Then they’re thinking about other options even though a mortgage is still the best option for them. It’s just causing people to take pause and kind of analyze their options. Do they want to go do a tiny home? Do they want to move somewhere completely different? Do they want to relocate and work remotely because a lot of employers are allowing that?”

For Gillach, educating clients about the prospect of rising rates is a key part of helping them find the right home, while getting them preapproved increases their chances of having their offers accepted.

“This is why people are spending so much more than the asking price, because they know they can afford it now at this price,” Gillach said. “But it will be a whole new price in two months, when all of these places that are going so much higher close and become a new comparable that we base pricing on. So think less about that extra $100,000 you’re paying, because what does that translate to in today’s mortgage world? About 300 bucks per $100,000, and you get the tax break on it, so it’s really only two and a quarter. Can they handle that much more a month? Yes, and they lock it in because they can get that rate.”

Realistically, most prospective homebuyers won’t find a home on the market that crosses off every single item on their wish list. The affordability crunch in many markets means they have to compromise on more of those must-have items to close a deal, while likely paying higher prices than they otherwise would in a more balanced market.

“You’ll find that most of the time clients have their non-negotiables,” Royal said. “Right out the gate, a bigger budget for them is a non-negotiable as well. It’s our job as real estate agents to show them homes that fit what they need within their budget. No matter how big the budget, you are likely going to have to make some concessions to get what you desire.”

Having honest conversations with clients about the state of the market and how far their budget will take them is key, Royal said. After the initial introduction, she starts by talking to them about the market, asking them questions about their understanding of it and how much research they’ve done.

“If I find that there are things they’ve been told or things they read in different markets, I am here to kind of bring them back front and center,” Royal said. “I tell them, ‘This is how we do things here in our market; this is what the market looks like for us.’ I set those expectations. I tried to get buyers to understand that competition is fierce. And you may not have all that time. We don’t have the same frenzy that we had last year, but you may not have that kind of time to wait. You have to still put your best foot forward.”

Chang takes a similar approach with clients, educating them on current market dynamics and what will help them succeed in buying a home. He and his agents talk to clients about what they are willing to give up and where compromises can be made.

“Everyone goes into their homebuying search wanting to find a home with 10 out of the 10 things on their wish list,” Chang said, referencing qualities such as location, age, condition and school district. “We try to be honest and straightforward that getting seven of 10 things on your wish list is more probable. You can always remodel or update a home, but you can’t change the lot size, city or location. When possible, it is important to be a little flexible on your clients’ wants so that they have the best opportunity to get into a home they will love. That being said, we also work on our clients’ schedule as much as possible to get them into a home they love.”

How rookie agents make the grade

Decoupling broker commissions could be coming

How does a community increase home values?