Decoupling broker commissions could be coming 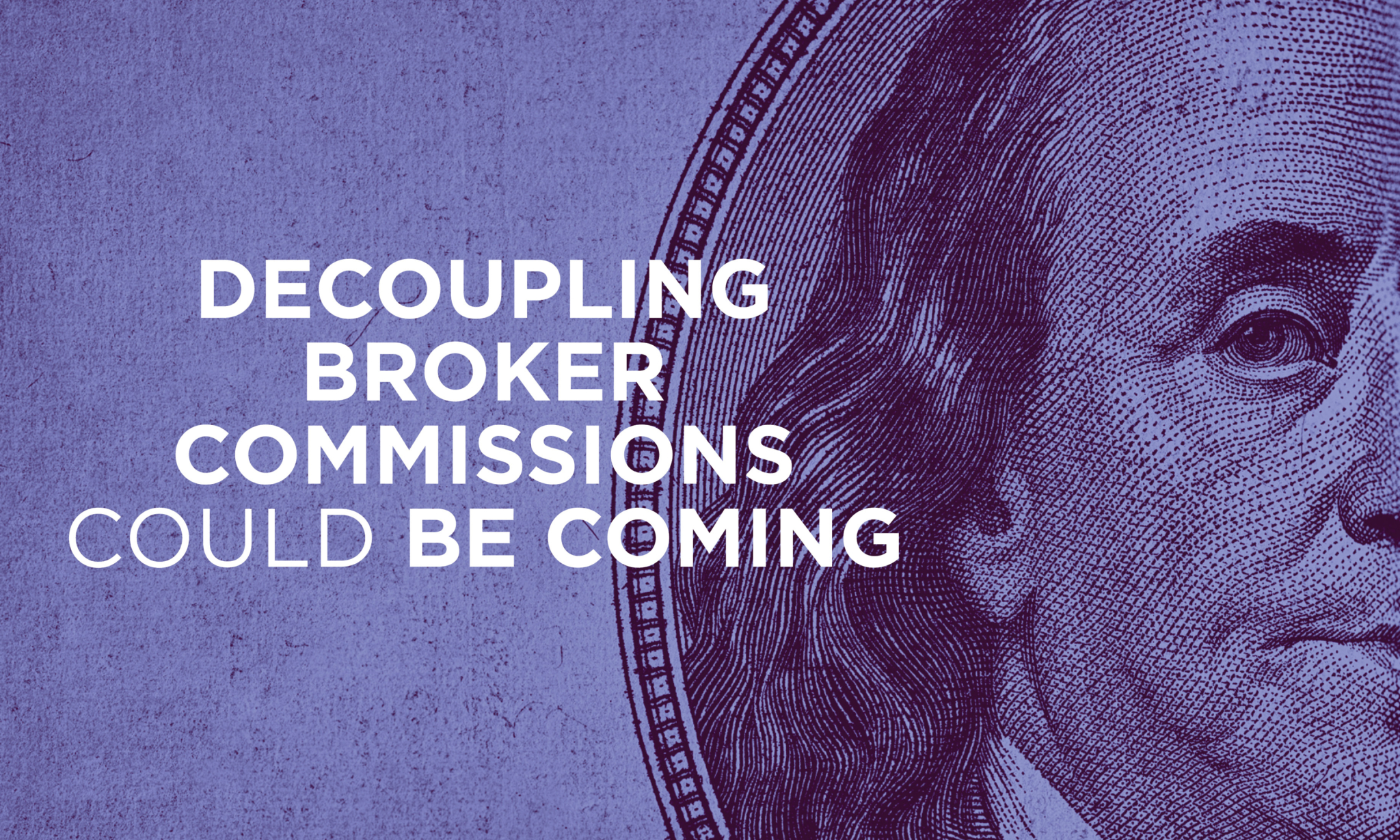 Agent commissions of the future could look much different than they do today, as a Department of Justice investigation into the issue of decoupling buyer and broker commissions continues, class-action lawsuits are advancing and associations and MLSs are adjusting their policies.

Those scrutinizing the coupling of commissions argue it stifles competition in the market and violates antitrust law, while those defending the status quo say the system of splitting seller-agent commissions paid by their clients strengthens the market and makes it less expensive for first-time buyers.

This arrangement of coupling commissions, promoted by the National Association of REALTORS® and most real estate brokerages across the nation, where the seller broker usually pays half of the commission to the buyer broker, makes it difficult if not impossible for the buyer to negotiate the compensation rate.

The latest on decoupling

The most recent news on the debate over agent compensation comes out of the Pacific Northwest, where Northwest MLS, which covers most of Washington state and part of Oregon, announced it will enact new rules in October to increase transparency on agent commissions. The goal is to make it easier for brokers to “fashion their own form of representation agreements with sellers and buyers to differentiate their services and fees, accommodate consumers’ needs and interests, and compete in the market,” the listing service said in an announcement on June 9.

Those changes include prominently stating the seller broker’s compensation to the buyer’s broker on the purchase and sale agreement. NWMLS also will give the buyer the chance to accept that compensation amount or modify that amount in an addendum to the agreement.

The rules update follows similar reforms in 2019, when the listing service became the first in the nation to publish and allow — but not require — brokerages to publish compensation amounts between the buyer and broker.

While NWMLS represents a fraction of the overall market, the changes there could spark a trend at listing services across the nation. In an email response to questions, NWMLS CEO Tom Hurdelbrink tells Phoenix Agent, “We have discussed these concepts with many of our colleagues around the country, and we do believe that others who are able to do so are discussing similar changes.”

Hurdelbrink also noted that while the MLS does not track the websites of all of its member brokerages, most of them are now posting broker compensation along with their online listings. That’s giving buyers a greater ability to negotiate compensation, he said.

Some of the largest brokerages in the region — John L. Scott Real Estate, Windermere Real Estate and Bellmark Real Estate, to name a few — have endorsed the forthcoming rule changes in the Washington market. “Buying and selling a home is the most complex and expensive transaction that most people will ever engage in,” Bobbie Petrone Chipman, the Pierce/South King County regional leader of John L. Scott, said in the NWMLS news release, adding, “Consumers deserve a truly competitive marketplace, a variety of service and pricing options and meaningful transparency when making such important, life-altering decisions.”

What impact it will have on the market in the long run is uncertain, though, even to the NWMLS leadership. “We do believe these changes will give more awareness and flexibility to brokers and their clients to better understand and agree on compensation and service levels that work for both parties,” Hurdelbrink said.

While the changes at NWMLS are a starting point for reform, even the 2019 changes have yet to break up the uniformity of commission rates there, according to the April 2022 Consumer Federation of America (CFA) report “Real Estate Commission Rates in 35 Cities: Uniformity and Variability.”

Stephen Brobeck, a CFA senior fellow and author of the report, notes a “remarkable degree of uniformity among commissions paid to buyer agents” remains in markets throughout the country — and that includes Washington state. Seattle was one of eight cities in the study where more than 88% of the buyer’s broker commission rates ranged between 2.5% and 3%.

The study of the western half of the United States — 7,000 home sales in 14 western cities — follows a November 2021 CFA report that included 11,000 home sales in 21 cities in the eastern half of the country. The analysis of western states shows that in five of the 14 cities — Albuquerque, Boise, Dallas, Houston and Oakland — more than 82% of the commission rates reviewed were identical, and in 13 of those cities, at least 49% were identical.

Brobeck says that while some sellers attempt to negotiate rates with their broker, they are usually unsuccessful and frequently told that it could jeopardize the sale of the home. The reason it could scuttle the process is due to a practice known as steering. “Convincing research has shown that at least some buyer agents steer their clients away from low-commission properties. Yet why, in a buyer’s market, would not some seller ask listing agents to offer a commission rate above the standard rate?” he asks in the study. Brobeck maintains that sellers get agent pushback because those seller agents worry about “violating the area standard and discouraging buyer agents who also would not want to gain the reputation of violating this norm.”

The National Association of REALTORS® is at the center of the issue, due to rules and ethics guidelines it issues to its 1.4 million members establishing the compensation structure. That industry standard has made the association a target for class-action lawsuits in Illinois and Missouri and an ongoing investigation by the Department of Justice.

NAR appeared to be close to reaching a settlement agreement with the DOJ last year, but in July 2021, the DOJ Antitrust Division withdrew from the negotiations, stating that the proposed settlement “will not sufficiently protect the Antitrust Division’s ability to pursue future claims against NAR.” The DOJ argued that while the settlement aimed to remedy antitrust activity and encourage competition in the market, “it also prevented the department from pursuing other antitrust claims relating to NAR’s rules.”

NAR forged ahead with parts of the settlement, including requiring MLSs to publish the seller’s broker’s offer of compensation to the buyer’s broker both on consumer-facing sites and in the listing services’ data feeds used by subscribers and others. Another reform enacted by NAR in November prohibits buyer’s brokers from representing their services as free.

Former NAR President Charlie Oppler wrote in November that the association’s reforms also forbid the practice of buyer’s brokers’ steering clients away from homes that have a lower-than-average commission rate. Critics argue the changes fall short of the complete decoupling of compensation between buyer and seller, but NAR has argued that such a regulation would make buying a home more expensive for first-time homebuyers. That’s because the cost of compensation could be passed on to buyers, which would end up pricing more people out of the market.

Mortgage lenders and government-sponsored enterprises generally disallow wrapping broker commissions into the cost of the mortgage, so that’s money the buyer would have to come up with in addition to their down payment. But Brobeck says mortgage lenders and GSEs could change their policies in response to such a reform. “If there’s an uncoupling, then it would be a very high priority of the real estate industry and the mortgage-lending industry to allow financing of buyer agent commissions,” he said in a telephone interview.

While it’s still unclear what impact changes at NAR and MLSs will have on commissions across the country, or whether the DOJ will take action any time soon, a decision from the courts could ultimately determine the fate of the issue. Both class-action lawsuits — one filed in Illinois by Christopher Moehrl, and another by Joshua Sitzer and Amy Winger in Missouri — accuse NAR, Keller Williams Realty, RE/MAX, Realogy and others of conspiring to artificially inflate commission rates in violation of antitrust law.

Both lawsuits threaten to upend the current rate structure that brokers have used for decades, and they appear to have staying power. Judge Stephen R. Bough began hearing oral arguments in the U.S. District Court of Western Missouri in April. And while the case in Illinois continues to work its way through the system, Judge Andrea R. Wood, who is presiding over the case, gave a strong indication that the plaintiffs’ arguments have merit in 2020, when she denied the defendants’ motion to dismiss.

In her ruling on that motion, she stated that when comparing commission rates to broker rates in other countries, which are typically uncoupled and substantially lower, the difference in rates “is sufficient to raise a reasonable inference that the Buyer-Broker Commission Rules (enforced by NAR) have resulted in supracompetitive commission rates in the United States real estate market.”

How rookie agents make the grade