What does the current generation of homebuyers and sellers look like? How old are they and how are they doing business? The National Association of REALTORS® (NAR) has answers with its 2022 Home Buyers and Sellers Generational Trends Report, released today.

The report provides insights with a by-the-numbers look at evolving demographics and was compiled based on a detailed survey of 5,795 recent homebuyers who purchased in the period between July 2020 and June 2021.

Who is looking for homes?

Millennials — 32 to 41 years old — continue to make up the greatest share of homebuyers, according to the NAR report, keeping in trend with the yearly results since 2014. During the period of study, millennials represented 43% of the market, with older millennials making up 25% and younger millennials, 18%. Most were first-time buyers: 81%. Younger millennials were the most educated age group purchasing homes, with 90% holding an associate degree or higher.

“Some young adults have used the pandemic to their financial advantage by paying down debt and cutting the cost of rent by moving in with family. They are now jumping headfirst into homeownership,” Jessica Lautz, NAR’s vice president of demographics and behavioral insights, said in a press release. “While young buyers use new tech tools, they also use real estate agents at higher rates than other buyers to help find the right home and negotiate the terms of the transaction.”

Those aged 42 to 56, otherwise known as Gen Xers, closely trailed older millennials, representing 22% of recent buyers. This group also earned the highest median income — $125,000 in 2020 — a pattern consistent with past years’ data. In turn, Gen Xers purchased the most expensive houses during the period of study; their median home price was $320,000. However, it’s worth noting, that this demographic includes the highest proportion of married couples at 64%, further bolstering household income. Gen X buyers also remain the most racially diverse homebuyers, with 23% reporting as non-white.

And, since Gen Z buyers were statistically irrelevant having represented just 2% of the market, the silent generation, aged 76 to 96, made up the smallest share. Being mostly retirees, these buyers had the lowest median income and purchased the smallest homes, with a median square footage of 1,800. Naturally, these shoppers were the most likely to purchase based on proximity to health services with 28% choosing to buy senior-specific housing.

“Many factors can contribute to the decision to buy or sell a home,” Lautz said. “For all home buyers under the age of 57, the main driver was the desire to own a home of their own. Among those 57 and older, the desire to be closer to friends and family was the top reason, followed by the desire for a smaller home.” 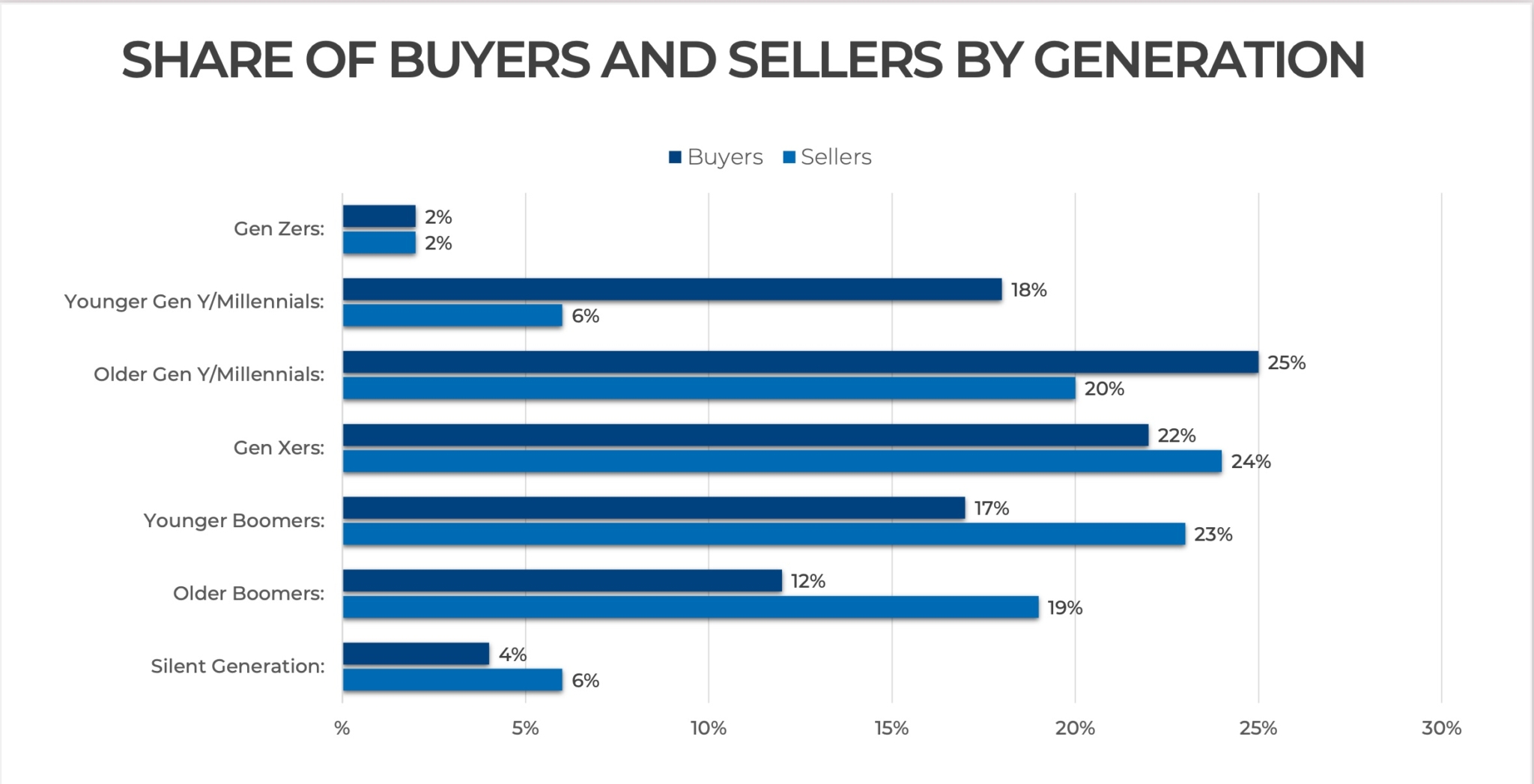 How are they shopping?

No matter the buyer’s age, the internet was the most common tool used in the home search. Nearly every respondent used the internet at some point in the process, and looking online for properties marked the initial step for most. The use of mobile devices compared to desktop or laptop computers was an even split among all buyers, although younger shoppers tended toward the former and vice versa.

In addition to those various web efforts, 87% of all buyers purchased their home through an agent, with younger millennials using agents at the highest rate (92%). Young millennials, along with the silent generation, also wanted their agents’ help on paperwork in addition to helping them find the right home.

Seventy-three percent of buyers interviewed just one agent during their home search and those agents were chosen based on their apparent honesty and trustworthiness. Those traits ranked above experience on the survey.

Satisfaction increased with age, according to the report. The No. 1 complaint was the struggle of finding the “right property.” Older baby boomers and older millennials were slightly choosier, with a median search time of 10 weeks for both groups. The home search was the shortest for the silent generation shoppers with a median length of six weeks while all other age groups maintained a median of eight weeks.

What are they buying?

Detached single-family homes were the most common type purchased, making up 82% of all homes sales.
Those purchasing new homes made up just 15% of the total share with the majority — 20% in this case — coming from silent generation. Those older individuals were followed by younger baby boomers at 18%. These new homebuyers said the goal was to avoid renovations as well as problems with plumbing or electricity.

The typical home purchased was 1,900 square feet, with three bedrooms and two bathrooms. Older millennials chose larger homes, typically at 2,400 square feet, while the silent generation chose the smallest homes with a median square footage of 1,800. 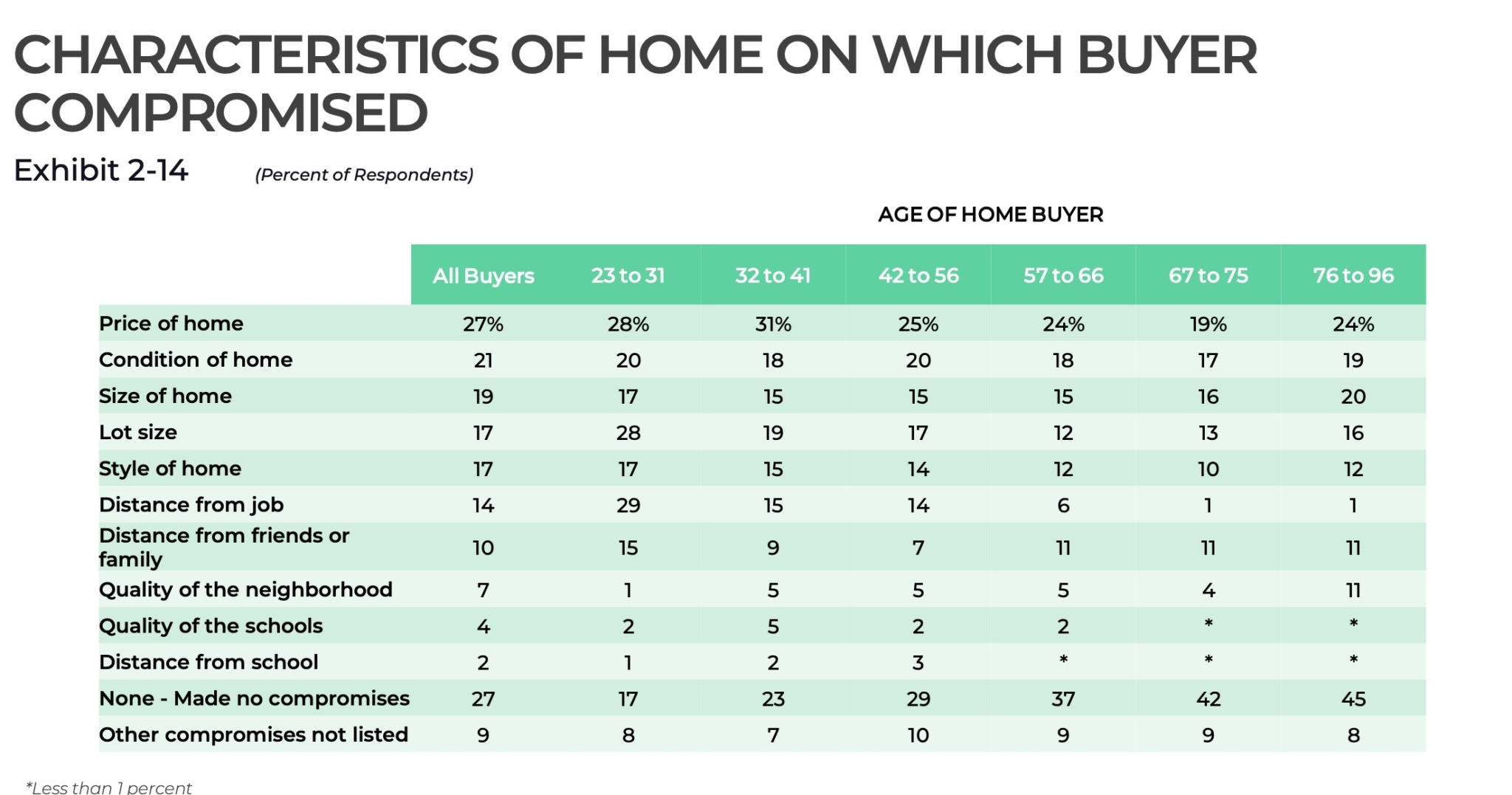 Who is selling their homes?

Overall, the vast majority of homesellers were white — 89% of all sellers — and highly educated (29% held a bachelor’s degree and 28% held a master’s degree). Among them, 69% were married couples. They were also, primarily, baby boomers. Combined, young and old baby boomers made up 42% of the total share of sellers, although, Gen Xers, with a median age of 49 years, were the largest isolated age group with 24%.

Across generations, sellers lived in their homes for a median of eight years before selling, down two years from NAR’s last annual report, with younger millennials staying for the shortest time (four years) and the silent generation staying the longest (18 years). Overall, the most common reason for selling was the desire to move closer to friends and family, followed closely by the desire for a larger home.

Ninety percent of all homesellers worked with a real estate agent to sell their homes. Above all, sellers wanted an agent’s help to price their home competitively and to market their home. In these instances, the reputation of an agent outweighed their perceived honest and trustworthiness — 32% of all sellers chose based on reputation. 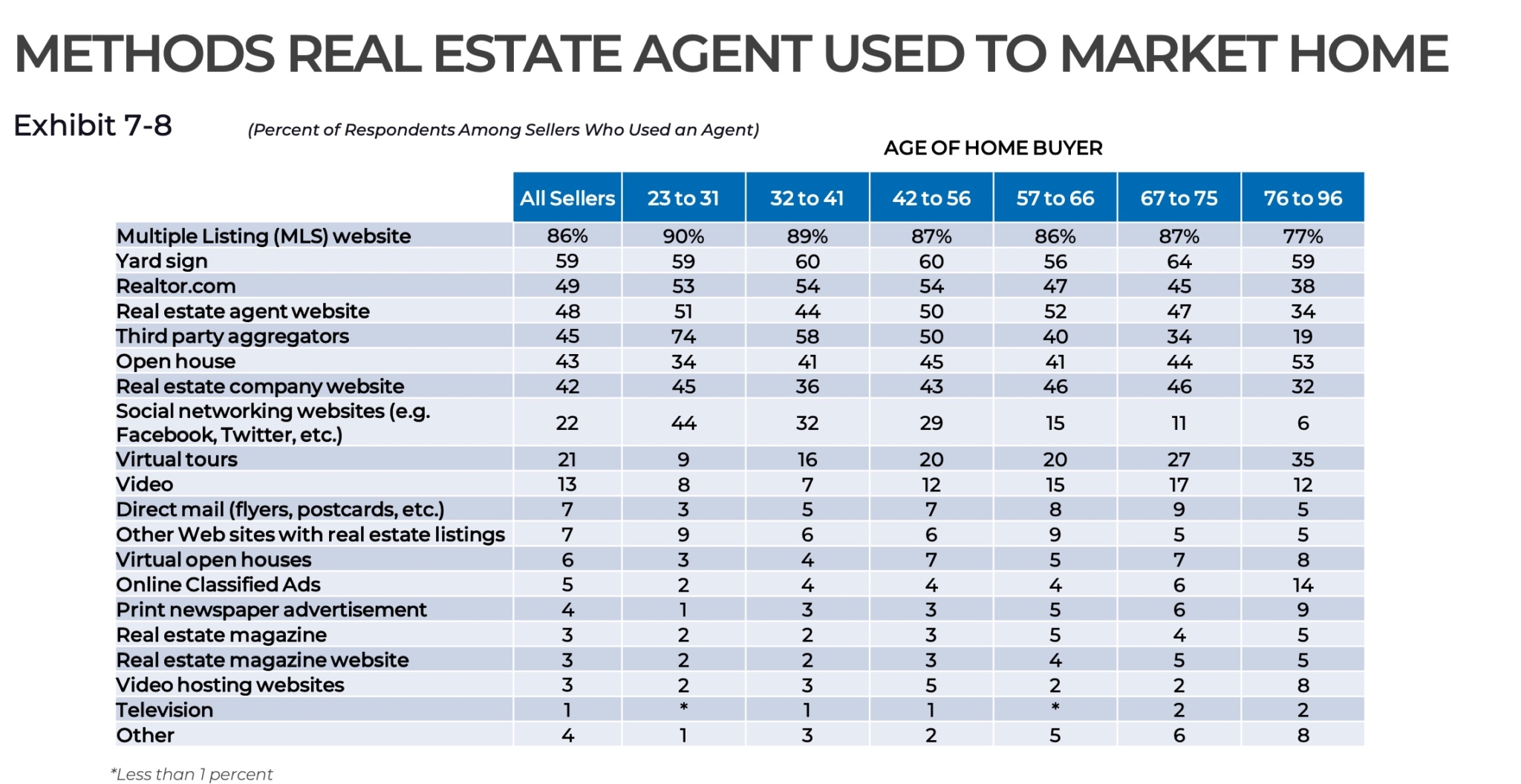 Twenty-five percent of all sellers reduced their asking price at least once, with the silent generation the most likely to do so. This stood as another stark contrast to younger millennials who were the least likely to do so. Similarly, 26% of all sellers also offered incentives to attract buyers with the likelihood highest among young millennials and lowest among the silent generation.

Eventually, the homes sold went for a median of $85,000 more than what sellers originally purchased them for. Younger millennial sellers, who held on to their homes for the shortest amount of time, gained the least in equity (a median of $44,500), again in direct comparison to the silent generation who earned a median of $151,500 in equity.

In all, 70% of sellers consider themselves “very satisfied” with the process: less satisfied than recent buyers, but up from last year’s report.